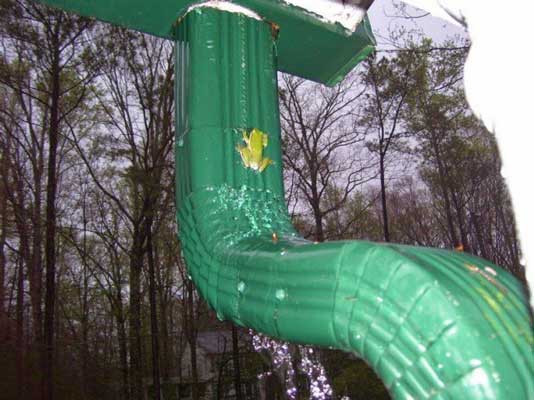 Frogs use mating calls to find their mates and, at least in cities, they have learned to amplify the sounds by sitting on gutters. Researchers in Taiwan studied the Mientien tree frog and they found the frogs were gathering in storm drains during mating season. When they measured these sounds experimentally, the mating songs from the frogs in the gutter were louder and longer than the mating sounds from frogs nearby on the ground.

It is thought that the male frogs that have learned to get up on the gutter to elicit their mating songs may have had a better chance of finding a mate. The guttural notes produced by the male frogs on the gutter have a measurable added dimension. Whether this enriched guttural music actually produces more chances at mating is yet to be determined.

Male frogs form groups, called lekks, during the mating season to sing their mating songs in an assemblage. Maybe there is a purpose to singing in a choir rather than singing solo. Sticking with the guys that can really belt it out may have its rewards. It is possible that singing in a group can mask the off-tones of a given individual. On the other hand, it might be much more fun to hang out with one’s buddies to carry on and attract females. A party atmosphere may lend itself to romantic (or hot) vibes more so than just warbling all alone.

The discovery about frogs using gutters to amplify their mating songs involved an actual quantitative experiment. The researchers set up defined areas to count the males inside the drains versus outside the drains and then they measured the loudness and duration of the mating songs that were emitted by the frogs inside the drain versus outside the drain. The researchers admit that more work has to be done to actually demonstrate that the purpose of being on the gutters is to get mates.  Also, the next step in the research is to actually count the number of frogs that successfully mated both inside and outside of the gutters to see if the louder mating calls produced more success.

Using gutters to amplify mating sounds likely came about with some trial and error. One can imagine a few attempts that did not work quite as well.  How might a hose work, a thrown away cup from a fast food restaurant or a beer can? A suggested study for the team in Taiwan to consider would be to set up an urban space with typical urban garbage and debris and then let the frogs explore.

When you wake up in the morning and see that the gutter drain pipes have become disconnected again, you may wonder if the frogs were partying the night before. Frogs getting up high on the gutter to use it to amplify their mating call is reminiscent of the man in the cartoon standing on a high ridge singing the Indian Love Song. You know the one where he sings, “I’ll be calling you oo oo oo oo oo oo, Will you answer too oo oo oo oo oo oo?”  Only the frogs must be doing it with a much lower guttural voice.