The Pleasures of a Varied Research Career

Home The Pleasures of a Varied Research Career

The Pleasures of a Varied Research Career

If the shoe doesn’t fit, try another shoe

I have always been fascinated by how cells respond to their environment, particularly how environmental conditions influence their cell division. Cell division itself is such a beautifully and precisely regulated system, but when the messiness of the cell’s environment starts impacting on the cell cycle, many things can go wrong. This is important to understand for many aspects of research, including cancer, development, and aging. I have worked in a wide variety of systems, from bacteria even to human cells, but one thing that I often come back to is to me a foundation of life: the cell cycle and how it is regulated by environmental conditions.

I started as a gene regulation geek. My first lab job was studying bacterial gene regulation (an unpublished story in itself I should write about) and then studying gene regulation in the innate mammalian immune system. But eventually I started working on more cell biological questions, including cell cycle. I started my cell cycle saga with fission yeast in my first post-doc in Kyoto, Japan. It was a wonderful experience, but somehow fission yeast didn’t quite excite me as much as my previous mammalian experience in immune cells excited me. I think I missed an organismal context for the cells I was studying.

I next worked with tissue culture cells. I guess this was one step towards a multicellular organism since at least contact inhibition of growth would come into play. I was initially studying subcellular protein localization in particular, but very early in my work I noticed a strange observation. When we studied a population of cells in culture that had been transfected with GFP-tagged Rac1, we saw that most cells had no nuclear localization, but a small minority of cells showed a strong nuclear localization. This immediately suggested to us we should look at the cell cycle with the hypothesis that the nuclear localization would correlate with a specific phase of the cell cycle. So Rac1 brought me back to my interest in the cell cycle.

To test our hypothesis, we synchronized cells in culture, then followed them over time both under the microscope, to determine the percentage of cells with nuclear Rac1, and by standard FACS analysis to determine their position in the cell cycle after propidium iodide treatment to stain the DNA. This easily showed us that the peak of nuclear localization of Rac1 correlated with the G2 phase of the cell cycle then was lost when the nuclear membrane broke down at mitosis. This ended up being a centerpiece of our publication. 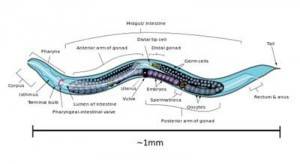 I next took a job working with the C. elegans germ line. I loved taking this job because it seemed to be a logical extension of my previous cell biology research. Working with cultured cells we could learn so much about basic cell biology, but the question always, and very legitimately, arose whether our results in culture truly reflected what actually happens in a whole tissue in a living organism. With C. elegans I could address this exact question. This worm has become my favorite model system.

I took on a project studying the role of insulin signaling in the development of the worm germ line. Ultimately, I recognized that this was likely to converge on a cell cycle question. Changes I saw in the proliferation of the germ line could be due to changes in the proliferation/differentiation cell fate decision (the dogma at the time) or could be due to changes in the cell cycle itself (less commonly explored at the time) , or a combination of both. I sought to distinguish between these, and was able to do so consistently. My main measures of the rate of the cell cycle was S-phase and mitotic indices. But it also became clear that changes in these two measures could represent an overall, global change in the rate of the cell cycle (as later discovered for the S6-kinase pathway) or a specific pause or block in a specific phase of the cell cycle. Coming from the cell culture mentality, I thought of using FACS analysis to get the necessary information to distinguish between these possibilities…but that wasn’t an option.

There are two reasons why FACS analysis wouldn’t work for this project. First was a technical problem. The worm germ line is syncytial, so it has not yet been possible to separate individual germ cells for FACS analysis. I did try to adapt my old nuclear isolation technique from cultured cells to worms to see if I could isolate individual germline nuclei for FACS, but I abandoned that approach because the potential usefulness didn’t seem to justify the amount of troubleshooting it would require to get it working, particularly given the second problem.

The second, more fundamental problem with FACS analysis when studying cell cycle within a whole tissue is that it doesn’t give data that reflects that tissue in situ. The germ line develops based on its spatial relationship with its somatic niche, the Distal Tip Cell. So spatial information relative to the niche is critical to understanding the development of the germ line. Such spatial information would be lost in FACS analysis. So we needed a technique that could determine cell cycle dynamics based on DNA content of a nucleus in situ.

I found a very tedious but ultimately very reliable technique from another lab that I applied to our system for our analysis of the influence of insulin signaling on the cell cycle in the worm germ line. This technique involves staining nuclei with a quantitative DNA marker (propidium iodide or DAPI), taking accurate and reliable Z-stack of pictures through a gonad, then manually drawing circles around each nucleus and quantifying through each Z-stack the fluorescence intensity for that nucleus in each plane, then integrating through those planes. It worked but was painfully slow. At my fastest, if I did no other work that day, I could do two gonads per day. But I got my data. And this technique gave us critical information about the role of insulin signaling in the development of the germ line.

But when we decided to expand our analysis to more signaling pathways and different developmental time points, this manual technique became too cumbersome to be practical. So, thanks to a casual comment by a colleague, Dr. Jeremy Nance, we contacted a bioinformatics lab run by our colleague Zhirong Bao.

Months of going back and forth revising an existing program, Starry Nite, that they had already developed to study the development of a worm embryo, and testing each revision against our manual technique that we and other labs already had proven, we developed a software package called (following the van Gogh theme) “Irises” that can automatically identify each nucleus, allow manual editing of those nuclei to assure accuracy, and quantify the DNA content of each nucleus based on fluorescence intensity compared with the fluorescence intensity of nuclei of known nuclear content within the same Z-stack. Ultimately this program speeds up in situ DNA content analysis by at least 5-fold compared with the manual technique without any loss of accuracy. We think this program can be widely useful for any tissue where DNA can be stained to determine a linear relationship between fluorescence and DNA content and where accurate Z-stack images can be taken.

My career has ranged from bacteria to yeast to cell culture to worms. I have learned a lot from each system. Some of my best advances have come where I have recognized the strengths and weaknesses of each system and adapted techniques used in a different context to make up for weaknesses in a system. Sometimes this can even turn what was a weakness into a strength.