PROJECTS LEFT BEHIND: The time my professor quoted my unpublished work

Home PROJECTS LEFT BEHIND: The time my professor quoted my unpublished work

I always knew I would be a scientist, though exactly what kind of scientist evolved slowly…and keeps evolving, for that matter.

As a child, in those years where only PBS stations provided educational programming, I was fascinated by nature and science shows. I distinctly remember the very first episodes of the long-running show, Nature, episodes entitled “Flight of the Condor.” Things like that just riveted me to the screen just as much as old Godzilla movies or the original Dr. Who show. I sucked in from PBS hours of science shows and always wanted to know more. It was inevitable, from that first moment of realizing how fun it was to learn how the world worked, that I would reach a point where the questions I asked had not been answered yet. That was when I knew I wanted to be one of the people who answered unanswered questions…a scientist.

I can attribute my ultimate focus on molecular biology to a particular college professor. As an undergraduate, I took an upper division Molecular Biology class at the University of California, San Diego. The professor was very tough. She covered an enormous amount of material each lecture. Her pattern was to go rapidly through the material until the last 10-15 minutes of class. Then she would realize she was behind her planned schedule and say, “Oh, I better speed up!” The class would always groan with fear of the massive flow of information that they knew was about to be unleashed upon us. It was difficult but I ate it up. I remember thinking to myself frequently during the course, “Wow, people can really DO THAT?” It was an introduction to some of the deepest secrets of biology that I had never heard about before that class. I was hooked.

This led to my first lab job. I answered an ad for a lab tech position with Dr. Suzanne Bourgeois at the Salk Institute. I remember during the interview, when they were describing the project, I got extremely excited and interrupted, exclaiming loudly, “I just learned about that in class! This is SO COOL!”

I got the job. 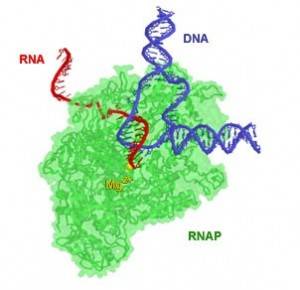 By User: Abbondanzieri on the English Wikipedia [Public domain], via Wikimedia Commons

It was my first time in lab and I loved it. Learning, interacting with other scientists, doing REAL experiments with carefully designed controls. I worked with a post-doc who was the last person in her lab to focus on prokaryotic gene regulation. My project now sounds so old…but it was still an open question then. We wanted to know if the geometry of the DNA molecule influenced the ability of transcription factors to initiate transcription. We studied the good old Lac operon in E. coli, varying the distance between the -10 and -35 promoter regions and seeing how this influenced the expression of the β-galactosidase gene. Our hypothesis was that as we increased the distance between the two promoter regions, we would slowly lose expression…until we reached approximately 10 base pairs added (one turn of the DNA helix). We expected to get at least some restoration of activity because the promoter binding proteins, though the distance between them was increased, would at least still be on the proper side of the DNA molecule relative to each other.

A summer of β-Gal assays, with solutions staying clear or turning yellow in test tubes and measured in a spectrophotometer, showed us our hypothesis was correct. The data was about as clear as could be. As I left my summer project, there were just a few other experiments to be finished before the lab planned on publishing.

I went back to school and soon after the post-doc I had been working with moved on. The rest of the lab was working on eukaryotic projects and no one was left to finish the work I had been a part of. In my naiveté, I assumed SOMEONE would finish it up because we had pretty much PROVEN our hypothesis. I mean, how cool is that? Science works! Hypothesis, experimental design, controls and all and we proved our hypothesis.

I moved on as did everyone else. The work never got published as far as I am aware.

Fast forward to my first year of Grad school. I had graduated from UCSD, spent some time in the South Pacific, and then worked as a lab tech at UCLA before entering a graduate program at UCLA. I had even published my first paper as a first author. I had largely forgotten my undergraduate time in a lab.

Our first year was intense. Each quarter we had a tough class as well as rotation projects. My rotation projects were fascinating. Discovering some really cool things about homeobox genes and about a mysterious ribonuclear protein particle in cells called a vault. Both rotation projects went the same road as my undergrad project, never seeing publication despite great results…though one of them led to someone else’s cool and successful graduate project. I chose not to pursue either of those projects but returned to get my Ph.D. in the lab where I had worked as a technician and where I had already published one paper.

But my first year of grad school, while taking our required, difficult but fascinating Macromolecular Structure class, we were being introduced to gene regulation. The professor was talking about prokaryotic gene regulation…and started talking about the geometry of protein binding to the DNA helix. He said he had talked to some of his connections in the field and the latest unpublished work in the field was that as you vary the distance between the -10 and -35 promoter regions of a prokaryotic promoter you lose expression until you get one turn of the helix away, at which point you see some restoration of expression.

The professor teaching me was quoting the very work I had done some years back! It may never have been published, but it had become part of the wisdom passed on to graduate students…including to me. It renewed the thrill that had started in that Undergrad Molecular Biology class and continued through that summer of research when I first started putting in 12 hour days out of sheer enthusiasm.

We all have work we have done that may have been great, but still never quite made it to publication. The real lesson is don’t leave the lab and expect things to be continued, though another project of mine many years later did get published, with me still as co-first author, some 2 years after I had left the lab. So you never know.

The saddest part of science to me is all the information that never gets published. Sometimes people leave and no one ever picks it up again even though only a few more experiments could finish it off. Other times the data is good but doesn’t come together as a “good story.” Or the story is good and helpful, but largely negative data. I heard about a time when people from another lab were shown one of my lab notebooks of carefully done, but unpublished data. They looked through it and said, “If we had known this it would have saved us so much time!” It had never gelled into a “good story,” so everyone had moved on from it…yet that meant other labs had to repeat what we did because no one knew we had done it.

It is a flaw in our system that possibly some of the newer, online-based journals can remedy…a way to publish negative data or data that doesn’t gel into a “good story” but still is important to the field.

Science is amazing and it is fun. But there is a sea of unpublished data out there, mostly just as carefully done and as informative as the published data. However, the way papers get published means more and more good data falls by the wayside. The tumorous growth of “Supplemental Data” kind of helps, but it has gotten out of hand, to the point where every good paper is expected to have at least a whole other paper hidden away in its “Supplemental Data” section. It is better than losing that data to the vast sea of unpublished data, but it isn’t as good as having a respected way of publishing, with peer review, some of the data that currently gets left behind. A simple cost-benefit analysis would show, as those people from another lab expressed looking at some of my unpublished, orphan data, that labs could save a great deal of time if we all could find a place to publish our negative and orphan data that doesn’t fit into the kind of story that one has to construct to get a paper accepted these days.

Still, I learned in grad school that even unpublished data can still seep, almost as if by osmosis, into the scientific community and make it to a graduate level course.