A (Re)Introduction to Toxicology

Home A (Re)Introduction to Toxicology

Although toxicology studies are integral to various fields of research, and are required prior to the approval of new therapeutic agents, there are many unknowns and misconceptions about toxicology by the general public, and even by other scientists. This is the first in a series of three blogs about what toxicology is (and isn’t), a brief overview of the history of toxicology, the current state of the science and future directions.

Part I – What is Toxicology?

What comes to mind when you think about toxicology? Rows of cages of rodents and rabbits waiting for testing? Criminal investigators talking about a corpse? Rows of antique bottles with a skull-and-crossbones label? All of these are part of toxicology (more about the animals in a later post), but the field comprises so much more.

According to Merriam-Webster, toxicology is “the study of poisonous chemicals, drugs, etc., and how a person or other living thing reacts to them” or “a science that deals with poisons and their effect and with the problems involved.”1 However, modern toxicology is more nuanced, with most studies now focusing on determining whether a specific agent is toxic at levels likely to be encountered by living organisms, and moreover, on uncovering how the toxic effects are occurring at the molecular level.

Toxicology studies can reveal a wealth of information, and can open new opportunities for research or even therapies for human health conditions. The figure below shows the results of extensive studies on the toxins and bioactive components contained in gila monster venom. Studies of this lizard’s venom led to numerous discoveries, including the development of a new drug to treat type 2 diabetes, exenatide.2-4 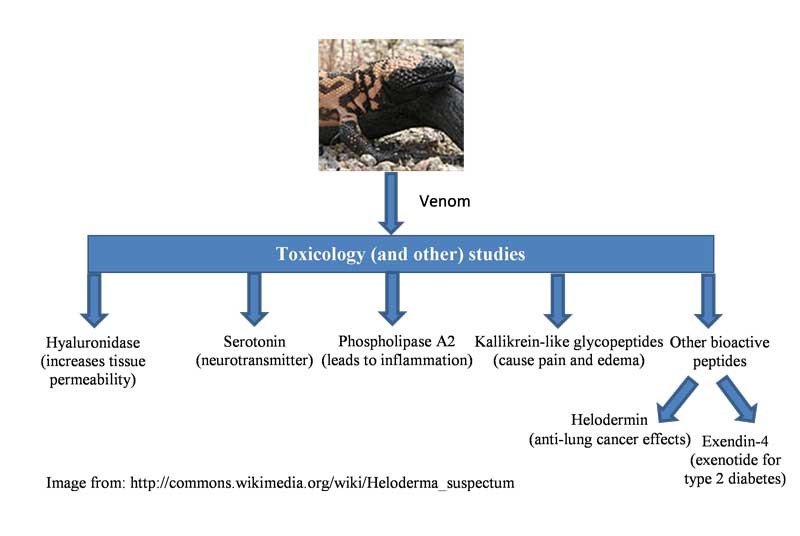 I initially became interested in toxicology based on my fascination with forensic science (I was in high school and getting my undergraduate degree in Biochemistry when shows like The Forensic Files and CSI were first becoming popular). Further reading about toxicology spurred me to obtain my Ph.D. in Pharmacology/Toxicology at the University of Alabama at Birmingham, which had a relatively large department at that time. This was because toxicology was fascinating, encompassing aspects of fields as diverse as (bio)chemistry, biology (including molecular biology), botany, zoology and genetics. My graduate and postdoctoral research actually focused primarily on oncology and inflammation, with intensive studies of candidate therapeutic agents and targets, providing an example of the variety of work that requires knowledge of toxicology. I furthered my studies and became a diplomate of the American Board of Toxicology in 2012.

The toxic effects of substances can range from rapid death (such as that due to exposure to cyanide) to birth defects (as occurred following the treatment of pregnant women with thalidomide), and toxic effects can occur following a single exposure, or may only develop after long-term exposure to high levels of the agent. Toxicology encompasses numerous sub-specialties based on the affected organ or system (i.e., immunotoxicology, neurotoxicology, cardiotoxicology), related to the type of exposure (occupational, food safety, drug development) or specific types of toxic substances (metals, aerosols, nanoparticles). Policy makers and regulatory bodies use the information obtained from toxicology research to set limits for exposure and determine whether new drugs can be approved for clinical use, and what is safe for the production of consumables (food, beverages, cosmetics, etc.) intended for human or animal use.

It should be kept in mind that the toxicity of an agent is always dependent on a number of factors, such as how the organism is exposed to it (via ingestion, injection, inhalation or dermally, etc.); how frequent the exposure has been and the duration of each exposure; the age, gender, and size of the organism; individual differences in genetics, other environmental factors, other exposures (such as tobacco use), the nutritional status; and of course, the dose or concentration of the exposure. The “father” of toxicology, Paracelsus, famously indicated that “the dose makes the poison”.5 Thus, even seemingly innocuous substances like water and table salt can be toxic when given in sufficiently large amounts, as indicated by several case reports.6-9

I hope this blog has provided a basic introduction to (or a refresher on) toxicology. Future blog entries in this series will continue to (re)introduce toxicology. I hope you will return to check out the rest of this series and future entries as I write about topics related to toxicology, as well as other new discoveries in various fields that I feel compelled to discuss, or on topics that might help researchers improve the dissemination of their data. 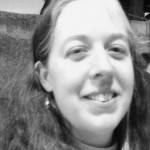